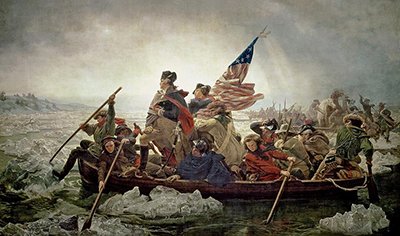 The symbol of the Union Fire Company and Rescue Squad originates from the painting by Emanuel Leutze of George Washington and his troops crossing the Delaware River enroute to the historic battle of Trenton on December 26, 1776.

The community of Washington Crossing derives its name from the famous event, and it was on January 20, 1920 that concerned citizens from this community along with residents from the community of Titusville combined to form the Union Fire Company for the purpose of protecting lives and property from tragic loss. A rescue squad was added to this service on September 16, 1943. Thirty five men and women dedicate countless hours to protecting its residents. The Union Fire Company and Rescue Squad maintain a fleet of two ambulances, two engines, a tanker, several marine units, and several support vehicles.

The new home of the Union Fire Company of Washington Crossing and Titusville, is regarded as the finest fire house in this section and will be officially dedicated soon. The colonial styled structure is of brick and is located halfway between Washington Crossing and Titusville. It has a fireproof engine room 20 by 20 feet, a meeting room of the same size, and an auditorium 40 by 80 feet on the second floor. In addition, there is a large kitchen equipped with all modern appliances. On the side of the building facing the River Road is a tile bust Of George Washington and under it the name, “Union Fire Company.” The bust and name plate are the gifts of Herman C. Mueller, of Trenton, president of the board of trustees of the School of Industrial Arts, who has a summer home at Washington Crossing. The building committee in charge of construction work included: Walter H. Hankin, architect; William H. Blackwell, chairman; Raymond H. Cadwallader, Isaac B. Lipman, J. Hart Smith, George Barnhart, Lambert Cadwallader, and Fire Chief Herbert N. Scudder. 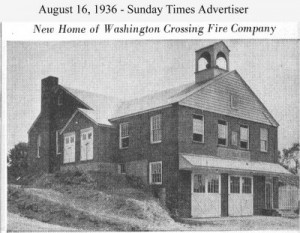 History of the Union Rescue Squad

We were awakened about 4:00 A.M. July 19, 1943 by someone pounding on the door of Bud Holcomb our neighbor looking for an outboard motor. The men of the Bucks County Rescue Squad were tired rowing while searching for the body of a man drowned in the river at Titusville in front of the school.

Though the Bucks County Squad had been at work several hours, we did not know they were there or that there had been a drowning. The night was raw and cold so Abby made coffee and sandwiches that were soon consumed.

I wanted to sound the siren and summon more help for the men but they said, “Daylight and charge of shifts would bring more of their own men.”

The body was recovered about 9:00am and turned over to the Pennsylvania State Police. Its work completed, the Bucks County Squad returned home.

Because the Bucks County Squad had to come all the way from Croyden and valuable time was lost in cases of emergency, a special meeting of the Union Fire Company was called and the rescue squad within the fire company was established.

The men were trained in all branches of first aid, water safety, and rescue work by Fredrick Staudenmayer, Mercer County Red Cross instructor. Talks were given by Robert Porter Chief of Bucks County Rescue Squad.

Our first call was recovery of a body from River in upper Titusville August 7, 1943.

The rescue squad of the Union Fire Company had its beginning just 20 years ago. It came into being August 7, 1943 when several members of our fire company got together and decided something should be done to meet the emergencies of drownings and other types of emergencies in this area. About this time several drownings had occurred in the river in our area. Assistance for these emergencies had to come from many miles away. At this time the Croyden Pennsylvania Rescue Squad affiliated with the Bucks County Marine Association was the closest unit which we could appeal to for help. Our own fire company members would of course always lend a hand in these emergencies, but not having had specific training in rescue work, the only thing we could do was the wait for facilities and equipment to arrive. About this time a few of our own fire company members attended several meetings of the Bucks County Marine Association. We gathered all the information we could at these meetings and finally started the organization of our own rescue squad.

The first problem confronting us in the organization of the rescue squad was procurement of equipment. Another problem at this time was some means of transportation for the equipment. A neighbor came to our aid at this time by offering us his old meat delivery truck at a nominal cost.

With the help of OPA, we obtained a new set of tires and then the men went to work on cleaning up the truck and preparing it for painting. Another good friend and neighbor cooperated by giving the truck a brand new coat of red paint, in keeping with the rest of the fire equipment. We were now ready for emergencies with a vehicle which became familiarly known as a “meat wagon.”

And though now equipped with a truck, generator, grappling hook, etc., we could not accomplish much at drownings without the aid of a boat. At about this time the Delaware River had risen considerably over night and taken with a number of local boats. Included among these boats that were washed away was a boat belonging to another good friend and neighbor was approached by some of the members of the rescue squad and asked if the squad could have his boat if they found it. He agreed to this and within a matter of hours the rescue squad had a boat. The “catch” was that the fellow knew where the boat was at all the time.

During World War II, as you know, we had a very fine group of junior firemen. These young fellows raised enough money to purchase a Scott air pack and also built a trailer on which to carry the boat. After the squad first experienced a drowning, it was evident that we needed a resuscitator. We were able to secure this resuscitator as a result of a house to house canvass for donations. The Ladies Auxiliary of the Fire Company came to our aid and realized funs by sponsoring several covered dish suppers. The proceeds of these suppers were used to buy blankets, sheets, etc. The Civil Defense Council of Hopewell Township cooperated with us by donating some stretchers and medical supplies. The Civil Defense Police Reserves donated six life jackets and the Medical Corps of Washington Crossing, Pennsylvania donated their first aid supplies.

A course in first aid was started by Fredrick Staudenmayer of Jacobs’s Creek Road. As a result of the first class, our rescue squad had 20 qualified first aiders. A short time later a lifesaving class was held at the New Jersey Police School at Wilburtha. Fifteen of our men attended this school and graduated qualified in life saving tactics. It is interesting to note as an example of the rapid expansion and growth of the rescue squad that at that time we were the only rescue squad in this area with qualified trained lifesavers.

In 1948 the need for a new ambulance was urgent. At that time we purchased a used 1941 Cadillac ambulance with served our community well until its “old age” began to catch up with it. The motor needed constant repairs and there were other major things wrong with it which would have made it a poor investment to attempt to fix it up. In 1953, the tenth anniversary of the local rescue squad, we purchased a new 1953 Packard ambulance. This piece of modern equipment will help the rescue squad do the job that it is being called on continually to do. One feature of the new ambulance is that we will be able to handle two litter patients simultaneously. From 1942 through 1952, the rescue squad has handled or participated in 446 emergency calls. These emergencies have included auto accidents, drownings, searches for missing persons, administration of oxygen, maternity cases, transportation to and from hospitals, blood transfusions, and others. The records indicate a steady increase in calls during recent years, mostly due of course to the rapid growth of our community.

A new squad truck was built to order to carry equipment and tow boats on a double deck trailer.

August 20, 1955 the greatest flood in the Delaware Valley history caused damage in the millions. Yardley Bridge was washed away, one of 50 bridges damaged as a result of Hurricane Diane’s great rain. The squad was constantly on duty working 24 a day for 5 days without rest.

We settled down to auto crashes, drownings, heart attacks, fires, and transportation to and from hospitals.

We were called to Trenton to help during arson fires in churches and schools March 14, 1956. Back to regular calls – car crashes, fishing accidents, drownings, car crashes, transportation, etc.

May 25 1962 a tornado like storm hit the area, blocking roads with trees (some 200 down) houses with roof’s turned off, and the new Bear Tavern School was badly damaged, there were no causalities.

No matter what emergency we answer to help afterwards its back to training on the latest up to date equipment and first aid techniques.

The Union Fire Company Rescue Squad in 2006 has two of the most modern ambulances. Ambulance 153-1 is a 2000 Brawn modular type ambulance, Ambulance 153-2 is a 2004 Horton modular type ambulance. Both ambulances have the ability to transport two patients simultaneously. Members of the rescue squad are all trained to the Emergency Medical Technician basic level. Many members are taking courses specializing in pediatric and geriatric emergencies. In September 2004, the Titusville and Washington Crossing area faced another flood situation. The flood wasn’t nearly as damaging as the 1955 flood. Local expert, “River” Jim Abbot, was a valuable asset to help determine the possible areas to be affected by the flood. River Jim spent many hours during the 1955/2004 floods to assist Union Fire Company and Rescue Squad to determine exactly where the flood waters would go. The officers and members of the Union Fire Company and Rescue Squad would like to thank past, present, and future members of company for years of dedicated service to the residents of Titusville and Washington Crossing N.J.